The Secret Door on Colors of the Dark 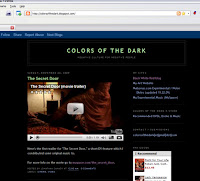 The Philadelphia area artist and musician, Jonathan Canady, was kind enough to mention The Secret Door on his "negative culture" blog, Colors of the Dark. Jon was also kind enough to provide an unreleased song for the soundtrack of The Secret Door. As I've mentioned before, I'm thrilled that my movie is associated with so many talented people and Jon certainly ranks among the best. Having him on the soundtrack is a good "get" as they say.
Check out his blog Colors of the Dark as well as his personal blog, Black White Red, which focuses on his own prolific artistic output.
Posted by PunkmonkeyEd at 11/23/2009 11:01:00 AM 0 comments

The Secret Door trailer is online

November Update for The Secret Door

I’m pleased to report that we wrapped shooting on The Secret Door on Sunday, October 18th. I believe that we started shooting in late May, possibly the 22nd or 23rd, so it feels good to be done. Making this movie was a really good experience and while I know that I say it all the time, it’s no less true that I am deeply grateful to all contributed in even the smallest way to its creation.

Editing and compositing are coming along well; so much so that I think we’ll be near the finish line in the next couple of weeks. Some members of The Secret Door family have contacted me recently asking about when they could expect to see the movie. All that I can say is - soon. Be patient.

The Secret Door is finally nearing completion. So, what’s next?

I have a very vague plan to throw a movie premiere/cast party when the film is ready. It all depends on how much money I have at the time and what kind of deal I can get. More details will be forthcoming to all interested parties.

Film festivals are definitely on the Punkmonkey Pictures agenda. I’m interested in exposing the movie to as many industry-type viewers as I can. Hopefully it will get some positive attention. Additionally, I have been talking extensively with a music industry friend about an official release of The Secret Door, probably as a DVD/Soundtrack CD combo. This option looks pretty likely albeit on a limited scale but not until next year, probably in the spring. I will post more about both of these initiatives as the information becomes available.

I guess that’s all I have for now. It doesn’t seem like much of an update for an entire month but there it is. We’re in the final stretch now. Thanks for checking in. Stay tuned.

PS - Since I can't have a Secret Door Update without pictures (it's like a rule or something), I've included some behind-the-scenes photos from "the chase" scene. Awesome photos courtesy, as always, of Scott Cameron. I like these pics a lot because "the chase" was so much fun to shoot and looking over them now reminds how much warmer it was then. Man, this film-making thing is time consuming! 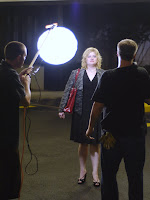